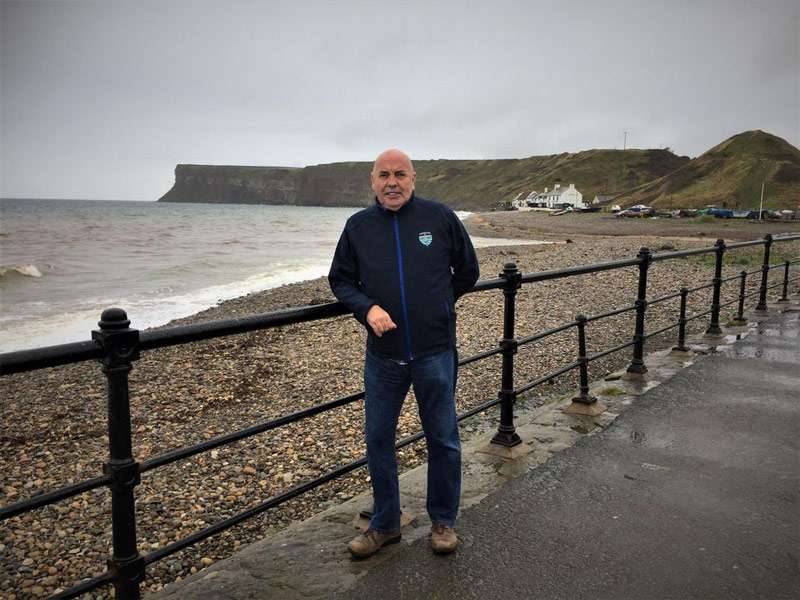 A charity campaigner has told how being stuck in a traffic jam 20 years ago led to him raising thousands of pounds for North-East hospice, Butterwick Hospice Care.

Eddie McNamee, of Skelton, near Saltburn, was driving to Middlesbrough to do some shopping for Christmas, in 2000, when the traffic came to a halt.

He said: “I found myself sitting behind a bus, and there was a big poster for the hospice on the back.

Eddie, who as a young man moved from Glasgow to try-out for Middlesbrough FC alongside Boro legend David ‘Spike’ Armstrong, decided he might be able to help “a little bit” for the hospice.

He began by persuading 33 fellow football fans to join him for a sponsored walk, which raised more than £4,500.

“We cracked it in one go, and I’ve been involved with the Butterwick ever since,” he said.

Since that fateful traffic jam 20 years ago, Eddie, now a 67-year-old grandfather, has carried on organising fundraising walks, raising a total of £17,800 towards Butterwick Hospice’s mission to care for terminally ill children and adults. This year Eddie and his chums undertook the Great North Run Reimagined and walked the half marathon in support of Butterwick Hospice Care.

Eddie, who is known as ‘Eddie Mac’ in Skelton, said he had also been inspired by his father’s caring nature and love of children.

“Whenever he was off work, he’d go and collect all the kids off the street and take them swimming, pay for them to go in and everything – that was me dad,” he explained.

Eddie’s wife, Sue, was a nurse for 46 years, so she also understands the value of the Hospice: “She’s just the same as me – she just wants to help the bairns. We’re a good team,” he said.

Jo Wallis, Head of Business Development and Marketing at Butterwick Hospice, said: “Eddie has been an outstanding supporter of Butterwick Hospice Care for years. His efforts have made a massive difference to what our team does across the North-East.

“It’s been a privilege for us to work with him, and we hope he’ll continue to be a valued supporter for many years to come.”

Gavin Peace, Area Managing Director for Arriva North East, said: “This is wonderful story and has brought a big smile to our faces.

“We’re very proud of the role our bus has played in Eddie’s incredible achievement for a very important cause in our region, and we wish him luck in his future fundraising efforts.”