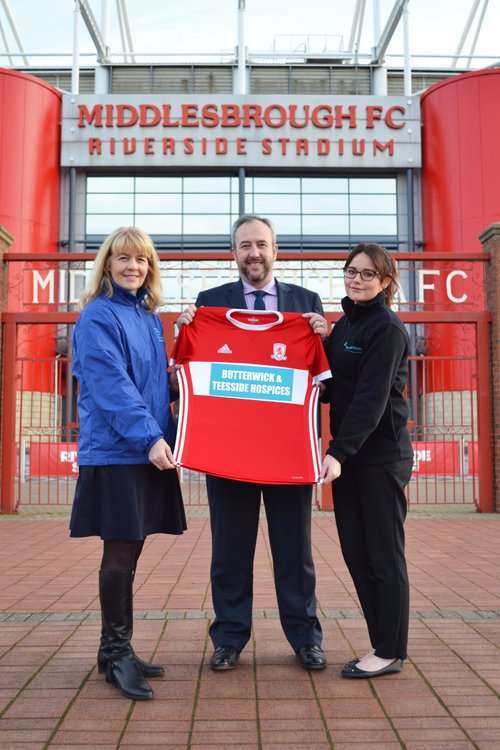 The logos of Butterwick Hospice & Teesside Hospice will appear across the front of Middlesbrough FC players’ shirts for the league game against Reading on 10thFebruary 2018, in a charity takeover thanks to the generosity of the club’s shirt sponsors Ramsdens.

Ramsdens, the regions diversified financial services provider, has donated its shirts sponsorship logo space to two local Teesside Charities, Butterwick Hospice and Teesside Hospice. Ramsdens, who this season advertise ‘Ramsdens Currency’ on the front of the shirt, has kindly made the gesture to celebrate the work of these two important local charities. They are dedicating the game plus profits from the sale of players shirts through a special auction, fundraising collections and a Boro Legends Sportsmans Dinner. All money raised will help the charities provide specialist care to local people with a cancer and other life limiting illnesses.

Commenting on the charity takeover game, Peter Kenyon, Ramsdens CEO commented, “Ramsdens are pleased to be supporting Butterwick Hospice and Teesside Hospice. It is fantastic to see both charities come together and work with each other for the first time. We are immensely proud to have been Middlesbrough shirt sponsor since 2010 and are well aware of the benefit that shirt sponsorship brings. We hope that the game in February creates awareness to the great work that Butterwick Hospice and Teesside Hospice do.

“There’ll be additional opportunities for supporters and fans to get their hands on one of the limited edition, signed and worn shirts. Further details will be announced nearer the time but will include a Ramsdens online auction, in branch raffle within Ramsdens Teesside stores and a Sportsmans Dinner event at the Riverside Stadium. Supporters will have the opportunity to purchase tickets for this event soon.”

Debbie Jones, Chief Executive at Butterwick Hospice said “Football is a large part of every community and touches the lives of people of all ages, our Hospice services mirror that and having the opportunity to raise awareness of our Charity within the local community is vital to our work.

Maureen Thompson, Chief Executive at Teesside Hospice said, “This is the first time the charity has been donated sponsorship on a Football shirt, Ramsdens have given us a wonderful opportunity to raise awareness of our vital work in the local community.

“We look after thousands of local people across Teesside each year and it’s important that people are given the choice of where they want to be looked after. Support from businesses like Ramsdens and Middlesbrough FC ensures that we can continue this work.”

“In supporting us with the sponsorship of a football shirt Ramsdens and Middlesbrough FC help us to continue to look after local people in both our Hospices and in the community ensuring they get the care they need where they want to receive it.“

Middlesbrough FC are also supporting the charities in a number of ways during February, particularly around the home game against Reading on 10th February, when two children cared for by the Hospice’s will have the opportunity walk onto the Riverside pitch and present the official match ball to the referee.