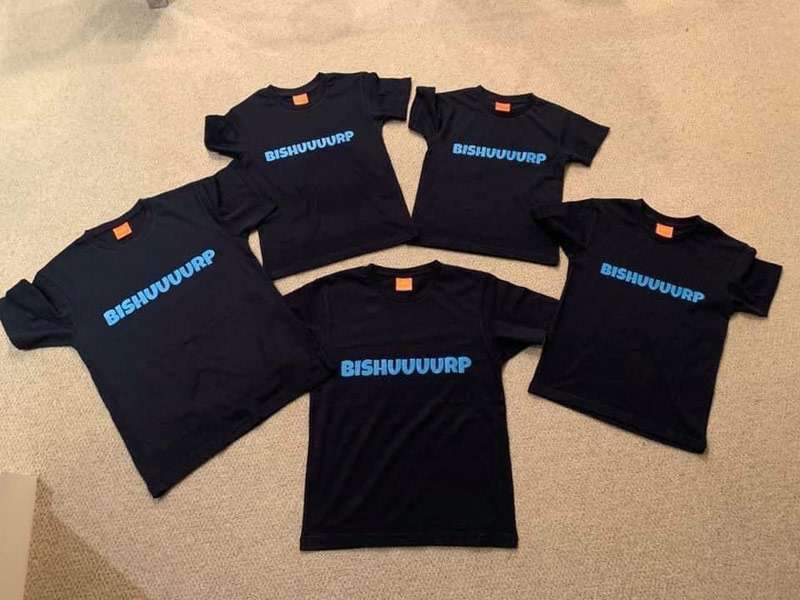 Bishop Auckland resident Andrew James Hughes has been bringing a smile to people’s faces (and ears) throughout this unprecedented lock-down period. Andrew, a key worker himself, has done this by “going live” on social media after work, playing tunes to raise spirits from his loft.

What started as a one off session after nightshift, swiftly snowballed into something much larger and more regular.

As popularity grew, one avid listener (Lisa Turnbull) made him a bespoke T-shirt with his commonly used phrase of “BISHUUUURP” on the front of it. Made by the team at local sports outlet Lorimers, using the “two blue” colours of Bishop Auckland’s local football team, Andrew soon started wearing the T-shirt whilst conducting his lost sessions. Watchers then got in touch regarding purchasing a T-shirt and an idea was formed to raise some money for a local charity. Charging £10 a T-shirt, £6 for the making of it then £4 pound going straight into the charity pot. Orders quickly skyrocketed. Selling of these T-shirts went viral with production then moving onto hoodies, car stickers and facemasks. All orders been delivered or collected using the government social distancing guidelines. Even a donation of golf balls was added to the charity pot to raise some extra funds!

The grand total raised was a whopping £3315.50, which is incredible!

The full amount has now been transferred to Butterwick Hospice Care, Bishop Auckland.

Huge thanks to the team at Lorimer’s on production of t-shirts, hoodies and car stickers. Also a big shout out to Robert Barrons for the kind donation of facemasks and to Dan Bell who supplied all the golf balls. And finally a massive thank you to Andrew who without this the whole uplifting story would of not been possible. All in all this has been turned into a great success that has at least given a ray of light in such a dark uncertain time.

On behalf of everyone at Butterwick Hospice care, congratulations and thank you to everyone involved.